Every player should be able to defend! It’s one of the most important skills. This page shows you a step by step tutorial on how to defend a badminton smash. In badminton, sometimes “good defense is good offence!”

When you have a strong badminton defense, it’s difficult for your opponent to win a point from you! The harder your opponent tries to penetrate your defense, the higher the chance that he will make an unforced error.

How can you anticipate when your opponent will smash?

It’s simple, whenever you hit a badminton clear or net lift, quickly switch to a defensive stance. The only chance your opponent can smash is when you hit the shuttle high up. 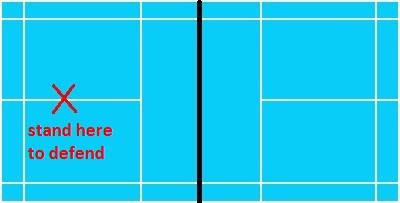 Whenever you lift the shuttle to your opponent (badminton clear or net lift), quickly move to point X as seen in the picture.

When defending a smash, position yourself slightly behind your footwork base (slightly behind the center of the court). This gives you some time to ‘catch’ the flight direction of the smash, so that you have enough time to react.

When you’re at point X in the picture, adopt the defensive stance.

1)Bend down as low as you can.The optimum point: bend down until your eyes are horizontally level with the top of the badminton net.

2)Keep your chest wide and straighten your lower back. Bend your knees, avoid curving your spine.

3)Make sure your racket arm (the arm holding the racket) is positioned in front of you. This is to ensure you’re ready to respond quickly (usually with underarm strokes) when your opponent smashes to you.

4)It’s impossible to tell whether your opponent will smash to your forehand or backhand area.Therefore, do not grip your racket too tightly. This is to switch from a forehand to backhand grip easily (and vice versa).

5)Besides, gripping your racket too tightly minimises your wrist action.

When receiving a smash from your opponent,

2)Stand on a FIRM defensive stance

3)DO NOT fear the shuttle. The shuttle won’t hurt you

While on the badminton defensive stance, it’s easy to move left or right, as long as you’re facing the front (your body facing your opponent). This enables you to retrieve a smash to the left or right.

Defending a badminton smash is somewhat similar to a football (soccer) goalkeeper defending the goal. Except that you use a racket instead of your hands.

1.The key to defend a strong smash from your opponent is to adopt the defensive stance.

2.Stand at a position slightly behind the centre of the court to give yourself more time to see flight direction of your opponent’s smash.

3.Do not fear the shuttle. When you’re afraid of the shuttle, you’ll naturally face slightly to the side. That means that the side of your body will be facing your opponent.If this is the case, you won’t be able to cover wide angles.

4.Be quick in moving to this ‘defensive base’ when you anticipate a strong smash from your opponent. The quicker you can move to this point and adopt the badminton defensive stance, you’ll be more prepared to receive your opponent’s smash.

GET A GRIP ON YOUR GAME